Many of the 160 people attending the Geauga County Republican Party’s annual Lincoln Day dinner at Fowlers Mill Country Club in Chester Township April 1 thought Party Chairman Nancy McArthur was giving them an April Fools’ joke when she announced the keynote speaker, Pastor Darrell Scott, could not make the event.

She explained he was stuck at the Trump estate, Mar A Lago, near Ft. Lauderdale, Fla.

“I wish it were an April Fools’ joke, but it isn’t,” McArthur said.

The party had invited Scott, who has become a national figure as an African American pastor from Cleveland Heights who serves as a spokesman and close spiritual advisor to President Donald Trump.

“He’s stuck in an airport near Mar A Lago and upset that he won’t be able to make it tonight,” she told the group, which included newly-elected State GOP Chairman Jane Timken, state-wide candidates, office holders and other dignitaries.

At the last minute, Scott contacted a close friend and colleague, Pastor James Davis, who only knew that he was going to speak somewhere in Geauga County at the invitation of the Mayor of Chardon.

“Darrell just told me, ‘The mayor of Chardon called me and you’ve got to go there tonight,’ so here I am,” Davis said the to crowd. His wife, Melissa, and their son, Devon, accompanied him.

Davis, who also serves as a Trump advisor and has represented the Trump campaign in a well-known debate with another black pastor on CNN before the election, said he became a conservative Republican at the request of his business mentor many years ago. 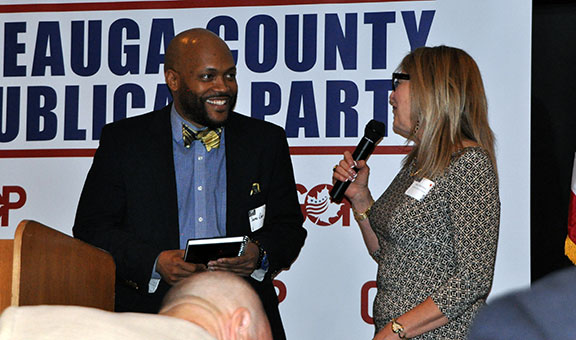 “I’m black. I’m a Democrat. It was automatic,” Davis said. “It’s just the way it goes. But she said, ‘You’re self-employed, you can’t be a Democrat.’ From then on, I was a Republican, but a very closeted one in the black community.

“But in order to be a good Democrat, if you’re black, you have to be a victim. I was raised in the church, and the Bible teaches us to be conquerors, not victims.”

Davis became a minister and has worked with Scott at New Spirit Revival Ministries in Cleveland Heights for the past 23 years. Six years ago, businessman Donald Trump was contemplating running for president, and he invited a group of prominent black pastors, including Scott, to pray for him and give him spiritual guidance, he said.

“Mr. Trump decided not to run at that point, but later, in 2016, he asked Darrell to be part of his team of spiritual advisers and Darrell said to the staff member, ‘Tell the boss that I’m in, all the way in. I was in, too, but we knew it was not gonna be easy,” David recalled. “People would say, ‘What? Trump? Are you sure about this?’”

Davis said he can always determine immediately whether a person is racist.

“We grow up having black person radar. We can tell,” Davis said. “But when I met Donald Trump, I knew immediately he is not a racist. He only became a racist when he ran against a Democrat. There are lots of hip hop songs over the years praising Donald Trump. So suddenly he went from being a hip hop hero to being accused of heading the Ku Klux Klan.

“Donald Trump has a sense of profound humility and spirituality that you don’t see in public,” Davis added.

He said he finds it amazing that he, an orphan from the black community of Cleveland, visits the Oval Office at the White House and speaks with the president of the United States on a regular basis. 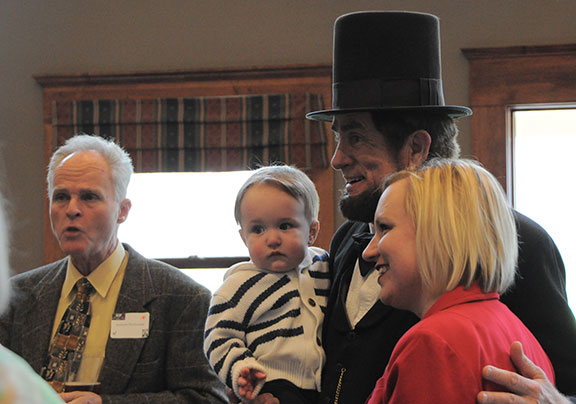 He told the audience 84 percent of Evangelicals voted for Trump and 18 percent of African Americans did also, which he called a peaceful overthrow of government.

“We’re like the dog that chases a car, catches it, then has to decide what to do with it,” Davis said.

He credits the Trump win as an act of God.

“The Democrats are blaming everybody — Julian Assange, the Russians, Putin, even Boris and Natasha from the old Bullwinkle cartoon,” David said. “It’s absurd and ridiculous. We know this was the hand of God. We dodged the bullet of all bullets. We dodged a nuclear missile.”

Davis said a strong America is the world’s best hope for peace and prosperity.

“The apple of God’s eye is Israel and God has said He will bless them who bless Israel, and curse those who curse Israel. America is blessed because of its support of Israel. We have a president who understands that,” Davis said.

He said leaders like Scott and himself are working in the black community to reverse the belief that the Republican Party does not represent minorities.

“It’s up to us to pull them into the tent,” Davis said.

The Democrats must put their political obstructionism aside for the good of the country, and the Republicans, used to playing an obstructionist role, need to learn how to govern, he said.

As for social programs, including healthcare, Davis said the Constitution does not guarantee happiness, just the individual’s right to pursue it.

“There is no such thing as ‘entitlement;’ none of us are owed anything by the government, but the individual has the right to achieve happiness in their own way, through hard work,” Davis said.

He drew a standing ovation and loud applause when he concluded with, “Under President Trump, and the Republicans, we are poised to do our part now to make America great again.”

After the speeches, McArthur presented the annual Patterson Crystal Apple Award, given by the chairman each year to a person who has dedicated years of time and effort to the local Republican party.

Named in honor of the award’s first recipients, Jim and Nancy Patterson, it is usually announced as a well-kept surprise at the end of the dinner.

This year’s recipient is Susanne Bagley, of Bainbridge, who has served on the Geauga County GOP Central Committee for more than 40 years, and who has volunteered in many capacities, including dozens of campaigns.

“This is such a wonderful surprise,” Bagley said, through tears. “My husband passed away six months ago and always supported me in everything I did. This would have made him very proud and happy.”

This site uses Akismet to reduce spam. Learn how your comment data is processed.

It was great seeing everyone on March 4, 2017 for our first quarterly Coffee Conversations. A special thanks to our sponsor and speaker State Representative Sarah LaTourette. Hope to see you at our next one!